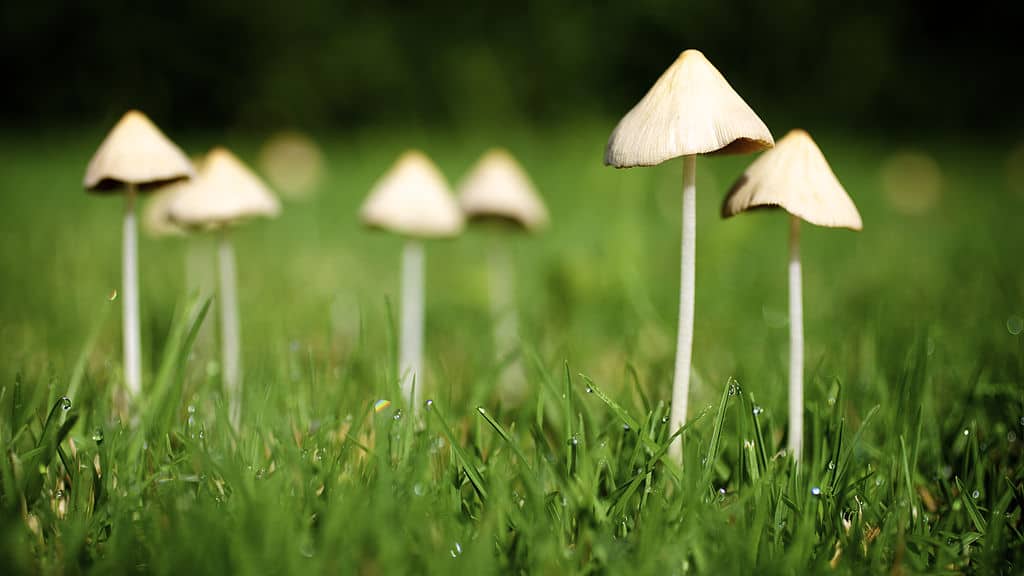 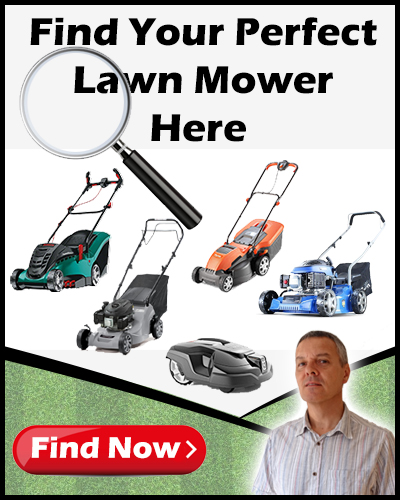 Your lawn can be susceptible to many diseases throughout the year, some are a result of poor lawn maintenance and care, which can be easily prevented and repaired, whereas others will appear with no fault of your own.

So even if you’re doing everything properly – mowing regularly, fertilising at the correct times of year and watering exactly when your lawn needs it, etc. – you could still see a few Fusarium Patches popping up now and again.

Lawn diseases aren’t the prettiest of things to be seen on a lawn so I think you’ll want to know how to limit your exposure to them as much as possible.

Below I’ve ran through 5 of what I think are the most common lawn diseases to be seen in the UK making it easier for you to identify and treat them.

This very common, cool weather disease enjoys the persistent drizzle and foggy conditions known all too well for us in the UK during the autumn and winter months – which is exactly when you’re most likely to see it. But don’t forget about it for the rest of the year, it can cope with temperatures up to 12 – 19°C/54 – 66°F so you may very well see it popping up during spring and summer as well.

If you start seeing small, circular, yellow patches, that can sometimes grow to 30cm in diameter, appear

on your lawn then you can be pretty sure it’s a Fusarium patch. Once the patch is established it’ll begin to turn a darker and dirtier shade of yellow and can eventually kill the grass beneath it, but only in severe cases.

During wet conditions the disease will begin to get even worse as a white or pinkish cottony fungus can begin growing, especially at the edges of the patches. After the disease has become inactive, without treatment, the area left behind will appear pale and straw-like. Definitely something you’ll want to avoid so make sure you follow the tips below.

For most homeowners that do take proper care with their lawn, you’re unlikely to be affected by Fusarium patches. The disease is most commonly seen on lawns that have a high thatch layer, poor drainage and limited air movement, these are very poor conditions for grass growth which is why they are the most susceptible. So if you’re a keen garden gardener, you shouldn’t need to worry about Fusarium Patch.

This disease is very similar to Fusarium patches, in fact the only real difference between them is that Snow Mould will be seen after snow fall. It spreads rapidly during the cold seasons, especially if the lawn is covered by snow as air circulation is impossible. The disease thrives when the circulation is poor so it isn’t just snow that can be the culprit, if you have over 2 inches of thatch lying on the lawn then you’re likely to see it as well.

If after the snow has melted you see white patches around your lawn then you probably have snow mould, which can even be pink in severe cases.

To prevent the disease from appearing again the following year I recommend applying a slow- release nitrogen fertiliser (organic preferably) that has a good supply of potassium. Just make sure you don’t apply it too late in the year as this can actually promote Snow Mould. For those in the South of the UK, it’s best for you to apply no later than November, and for us in Scotland in the North, we should apply it no later than October because of the colder weather. 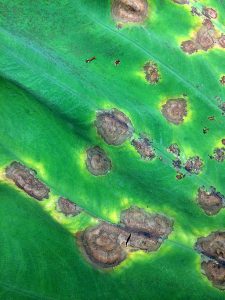 Also known as leaf blight, leaf spot affects lawns all over the UK and can be caused by a number of different fungi. You’ll most likely see it appear at the end of spring and during summer as it favours warm and humid conditions, and will spread rapidly during times of rainfall as the spores of the fungi will be carried from leaf to leaf by water splash.

In most situations leaf spots won’t kill your grass and once it stops developing the turf will recover. But if the conditions get really wet and cold for a long period of time, say 2 weeks, then it can become so bad that it does kill the turf, especially if it is under fertilised. As it can be caused by a number of different fungi, most of them behave very similarly and because of that you can treat them pretty much the same.

Just watch out when you do notice Leaf Spots, they are easily spread if you are aerating, mowing or even just walking across the lawn. The spores are just too small for you to see, only after they’ve attacked your grass will you notice them.  They produce small yellow spots on the leaves which can eventually turn tan or even black sometimes with a red border, which you should be easily seen so keep your eye out for them.

A stressed plant is more likely to be affected than a healthy one so if you make sure the grass is well maintained and properly watered then you should be okay. Also make sure when you’re mowing to have the blades nice and sharp and don’t cut the grass too short, this makes it easier for the disease to spread. Also, if your lawn suffers from thatch then consider aerating it to ensure proper drainage.

This lawn disorder can be seen in a few varieties and can come in complete circles, ribbons or arcs. These are areas of stimulated growth that can be associated with bare patches of turf and toadstools. Even though the way these are contracted are quite similar and can often have the same effects, they do tend to look different.

There isn’t always an obvious cause to why these appear but in most cases it is because of rotting wood or root in the soil. As the root rots downwards towards the soil, it develops mycelial spores that work their way up to the turf surface.  This mycelial then become hydrophobic which in turn makes the soil water resistant, worsening the problem. It’s because of this why the disease is so hard to treat. 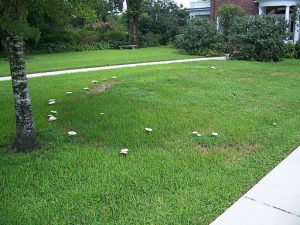 This is the most common kind and is most evident during dry weather, it is a ring of dead grass bordered by healthy grass and is often populated by moss and toadstools. It you take a sample of the affect area it’ll smell musty and will have white specks of fungal growth upon it.

These specks cause the lawn to become water repellent which is why you’ll notice the grass falling off, not because the fungus attacks the grass but because the grass cannot get any water. This make it very hard to treat if the ring has completely dried out, the grass will be difficult to re-wet so you might have to wait for rain in the winter months.

This is seen as a perfectly green and luscious ring of grass that is sometimes growing toadstools. There isn’t much you can do about these rings as there aren’t many remedies for them. Although they can be masked to a certain degree by maintaining a good fertiliser and iron content. 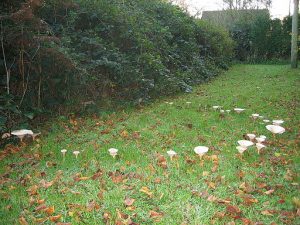 This form is just a ring of toadstools, usually only seen during spring or autumn in times of wet weather. Again there is no know remedy for this kind of Fairy Ring but regular picking, brushing and mowing the affected area can prevent the spores from appearing again.

This lawn disease is probably the most well-known, it attacks leaves and will cause excessive damage however it won’t attack the entire plant so recovery is usually pretty good. It thrives on plants that are suffering during stressful times, mainly during late summer or early autumn in the wet and warm weather.

This disease is usually seen as the grass leaves begin to turn yellow and if you look a little closer you’ll notice an orange speckling on the leaf surface. These are fungal spores that are ready to be transferred to a new set of grass leaves. However this colour can change, in autumn the fungus can turn black containing over-wintering spores.

If you happen to walk over an effected area then your shoes and clothes might turn orange as they become coated in the spores. Try your best to drag the fungus anywhere as this will just cause more problems and I recommend you wash them afterwards.

In the most severe cases you will notice the grass leaves turning brown and shrivel up but it shouldn’t kill the grass.

The disease is most common after periods of wet weather, especially near the end of summer when humidity is high. Just watch out though, the drying effect of summer can disguise the disease at which point most people which just assume their lawn is suffering from drought and not Red Thread. The lawn will begin to show small patches of grey-brown turf at first but if you look a little closer you’ll see little red straws sticking out from the leaves.

Although humility is the main cause of Red Thread it is not the only cause, just about any grass what so ever in the lawn can be the culprit. They’re usually like; poor cutting regime; thatch; compaction; and lack of feeding.

Even though the grass can start to look pretty poorly, this disease won’t kill it entirely. It just turns them a little straw like, especially when the disease is what caused the damage and dried up. Red Thread will rarely kill any of the grass.

To take care of the damaged areas there are a few thigs you can do:

If you found this post interesting then maybe you’d like to see some of my other content, like my robomower reviews? If so then head over to my Robot Lawn Mower Review Page, I’ve reviewed various models all designed for different purposes so if you’re in the market there won’t be a better place to go than here! 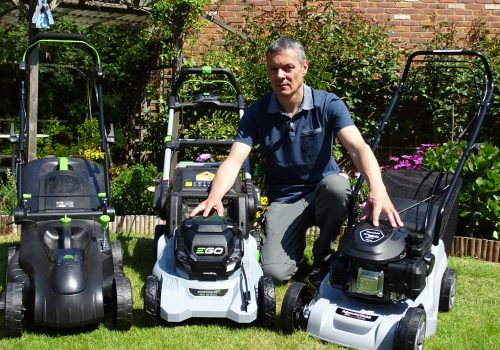